Sex Humor: Why Couldn’t Kermit’s Voice Have Been Fired Over A Sex Scandal?

This article first appeared in our sex commentary blog, eroticscribes.com.

For instance, when I saw a headline proclaiming “Ed Sheeran Deletes Twitter—but Not Because of Game of Thrones Backlash,” part of me immediately wondered if Sheeran had accidentally tweeted a picture of his penis. This was a big leap for my brain to take, I admit, but cut me some slack; I have written approximately four billion posts about Anthony Weiner, after all.

Similarly, when I saw Brett Favre’s name was back in the news, my first thought was “Oh – who did he send a dick pic to this time?” As it turned out, Favre was being mentioned for a far less interesting reason, but on the bright side, receiving the Rotary Club of De Pere Distinguished Service Award probably won’t lead to journalists asking embarrassing questions to his wife.

Yes, I’ll admit it: I badly wanted the firing of the voice-actor behind Kermit the Frog to have something to do with sex.

For the most part, I have zero use for former Fox News talking head Bill O’Reilly. Even I must admit, however, those transcripts of his obscene phone calls to producer Andrea Mackris have given me tons of joy over the years. In fact, come to think of it, about the only way I could derive more pleasure from them would be to hear them read in the voice of Kermit the Frog! 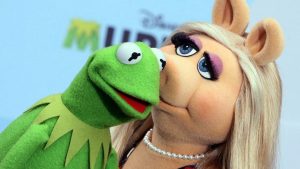 While I’d like to think Kermit could keep straight the difference between a loofah and a falafel, I’m sure any harassing calls he might make to Ms. Piggy would be rife with references to sizzling bacon and/or “doing it froggy style.”

Alas, it appears the end of Disney employment for Kermit’s voice actor had nothing to do with sex, sexual harassment, loofas or falafel. But I’ve never been one to let appearances, or reality, interfere with my far more entertaining fantasies and speculations, so maybe the scandal-door isn’t all the way closed here, after all.

Wait, Do You Mean “Character Issues,” Or Issues With Characters?

According to the published reports, it sounds like Steve Whitmire, the puppeteer who voiced Kermit for nearly 30 years, wasn’t fired for talking about rubbing a female coworker’s breasts with deep-fried balls of dough, but for his being “disrespectful in being outspoken on character issues.”

Brian Henson, the son of late Muppets creator Jim Henson, said that Whitmire’s communication with his coworkers was “appalling” and characterized by “outrageous demands” and that Whitmire “often played brinkmanship.”

“Steve would use ‘I am now Kermit and if you want the Muppets, you better make me happy because the Muppets are Kermit,’” Henson added. “And that is really not OK.”

I don’t mean to hop to conclusions, but what would make a talking frog happier than being pleasured by a sexy pig, a porkpie hat-wearing dog, or a… uh… well, whatever the fuck is going on with Beaker.

On second thought, speaking of Beaker, Whitmire also gave voice to the freaked-out lab assistant, so presumably none of the complaints about Kermit came from him, or Rizzo the Rat, Link Hogthrob or the Newsman, all of whom had Whitmire pulling the strings at one point or another.

No matter how much I might want sex to be at the center of Whitmire’s firing however, I’m just not sure how to interpret Henson’s comments. When he says Whitmire was “outspoken on character issues,” does this mean he was critical of the character of others, or critical of others’ characters?

For now, I guess I’ll just have to live with the explanations offered by Disney, Henson and Whitmire. But, if a year from now we start hearing rumbling rumors about green having been the right color for Kermit, but for the
wrong reasons, I won’t be shocked.

Of course, either way, I suppose all of this is arguably none of my business…

Want to Boost Your Libido? You Need to Read This

Can Sex Without An Orgasm Still Be Fun For Women?

Got 2 Minutes?
Take Our Survey!